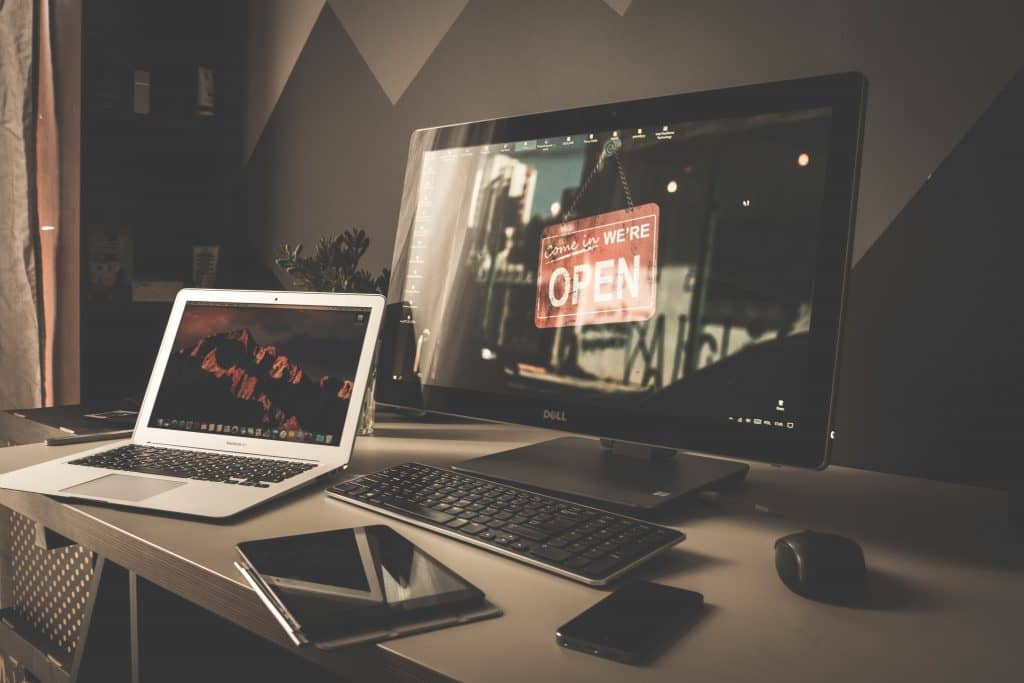 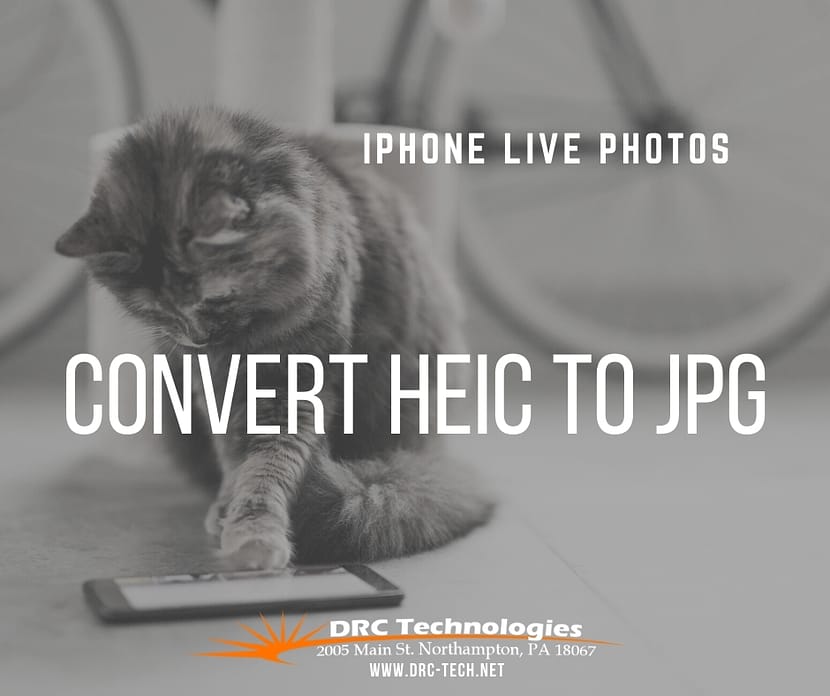 Have you ever taken a Live photo on your iPhone, sent it to another person or application, only to get “unsupported format” or “unknown file type” errors? That’s because it’s in the HEIC format as opposed to the normal JPG format. We’ll show you how to convert HEIC to JPG Photos so they’re compatible with other applications & devices.

What is Live photo?

Live photos are a single photo plus 1.5 seconds of video before and after the picture.

What are the benefits of Live photos?

You have a myriad of shots to choose from taken of the same subject in just a few second’s time. This is particularly useful if you have a kid or animal that can’t sit still, or if it would’ve been the best group pic ever if only Sally hadn’t of blinked.

What is an HEIC photo?

HEIC stands for High-Efficiency Image Container. That’s tech speak for a picture format that can hold lots of information in a smaller amount of space.

Did you ever see one of those mattresses in a box on amazon? They shove a zillion pound mattress into a box the size of a child and deliver it to your door. Then as you cut it open, it violently inflates, flinging you across the room in a fit of giggles and shrieks.

So, lots of stuff in a tiny compartment.

What does this mean for you? More room on your phone to take more cat pictures.

We’ll get into the other benefits of the HEIC format in a minute.

What is a JPG?

JPG is the most common form of format for photos. JPGs are what your digital photos have been forever. They are slightly compressed, but not nearly to the degree that HEICs are.

They’re more like the old smooshed mattress in your guest room, as opposed to a mechanically smooshed, vacuum sealed bed in a box.

Also, in case you were wondering, JPG and JPEG are the same thing. Both stand for Joint Photographic Experts Group, the group that originally created the standard.

Why JPG or JPEG?

The original founders were bad at acronyms.

Actually, the original file extensions for Microsoft were limited to three characters, hence, JPG. They’ve since extended the limit so the E for Expert can now be included.

Convert HEIC to JPG – The Benefits

HEICs are more efficient than JPGs in compressing images. Word on the street says that HEICs compress at twice the rate of JPGs.

Here’s where the shiny pretty thing loses a little bit of shine. HEICs aren’t compatible with many existing applications and devices.

The good:  Your phone is supposed to automatically convert HEIC into JPG when you try to upload or attach it to a third party app, or a native app like a text for example.

The bad: If you’re trying to save to your PC or to some applications like Google Drive, sometimes it doesn’t convert.

Fret not. There are work-arounds.

How Do I Convert HEIC to JPG?

The latest editions of photo editing software such as Adobe Lightroom (paid) or GIMP (free) have begun to support the format.  Don’t know how to use or need involved programs like that?

Get an HEIC to JPG converter app from the Microsoft Store.

We recommend HEIC to JPG Converter like this one from Duckhead Software. It’s easy to use, doesn’t require uploading your photos to the internet, and has high ratings. You can convert 10 photos per day for free.

To get it, type the words Microsoft Store into the search on the bottom left of your screen.

Then, type HEIC to JPG Duckhead into the Store Search as seen in the upper right of the screenshot below.

Install it and convert HEIC to JPG by simply dragging and dropping your picture in no time.

We’re DRC Technologies & we’ve been serving the computer repair & general IT needs of the Lehigh Valley since 2002.

May all of your photographs be fun, beautiful, & full of cats!

DRC Technologies
4.7
Based on 29 reviews

Allen Ulrich
17:21 30 Apr 21
I had two desktops and a laptop rebuilt by this company. The work was done quick and came well within the quoted price,... (the laptop actually came in cheaper than quoted). All systems work great and I have no problems what so ever. I will recommend DRC to anyone who needs any type of computer repair. If you are looking for a good rebuilt system DRC does have many units available.read more

Michelle Steirer
01:25 04 Mar 20
Took in my old desktop that I wanted working again.Guys are very knowledgeable and helpful.Definitely recommend!

Jocelyn Graeser
01:18 11 Dec 19
Omg Where was this place all my life?? They Take and recycle so much stuff. Finally got rid of my old tv set that I... thought I'd be stuck with forever. So anything you know you can't throw out you can take there.read more

Lilly Gioia
17:56 26 Nov 19
Professional, courteous, dependable service no matter what the issue is.I've been more than satisfied with the work... DRC has provided for manyyears because the job gets done right.read more

Karl Jahnke
22:20 15 Nov 19
Very happy with my recent experience at DRC. It's great having people so close to home that I feel good about working... on my computer. Thanks!read more

KATHLEEN BASHORE
16:13 04 Nov 19
We've had DRC as our "computer guys" for well over 10 years. We always get prompt and very knowledgeable support, as... well as advice on new versions of software and upgrades. We highly recommend DRC.read more

Marvin Frack
02:31 23 Sep 19
They got my computer cleaned up and running faster than ever.

Gene Sywensky
16:11 29 Jun 19
Great down to earth people that know computers and have given me very good advice on how to use my laptop and I cannot... thank the staff enoughread more

GERALD SEIP
03:31 15 Jun 19
We recently purchased a refurbished laptop from DRC. While it has only been a week or two and I am still getting used... to the differences from our old computer- so far so good. They even called us after about a week just to see how it was going. Very nice company and super nice people. I highly recommend them over some big box store. JERRYread more

Chuck Albert
13:38 07 May 19
Phenomenal service and experience with DRC Technologies! After realizing potential future issues with my PC, Chris... recommended new hardware at a affordable price. They were fast and knowledgeable with solutions to my issues. I will definitely have my computer serviced here in the future when problems arise!read more

Danielle Lubene
16:25 22 Mar 19
Our company has been working with DRC Technologies for almost 4 years. From replacing all staff PCs with current... technology to helping with our in house operating system and test equipment (which are old technology that we need to work within), Chris and the DRC staff have always been knowledgeable, efficient and courteous. They have responded to several emergencies very quickly and resolved all issues. We will continue working with DRC for all our IT needs. They're the best!read more

Randy from Penmar
15:26 19 Mar 19
My company has been doing business with DRC for over 5 years and I've recommended them to several companies. They've... repaired my computers and set me up with software that has helped run our business. Excellent staff.read more

Robin Rivera
08:52 25 Feb 19
I've been there a couple times for unrelated jobs, and when either calling or in person, always very warmly welcomed... with a ton of patience to answer questions. Plus, super close, easy to get to and reasonably priced.read more

Peter Best
18:01 03 Jan 19
Fast, professional, and knowledgeable service for a reasonable price. The diagnostic fee was presented upfront and... fully explained. Even better, when my PC problem turned out to be a quicker fix than I thought, the diagnostic fee became my repair fee--no additional cost.read more
Next Reviews

We do not, have not, & will not share your information with anyone. Any information you provide to us will be stored on our secure server.

By signing up for our email list you agree that we will from time to time, send you notifications of new blog posts or a newsletter. You may unsubscribe at any time by following the link in the notification.