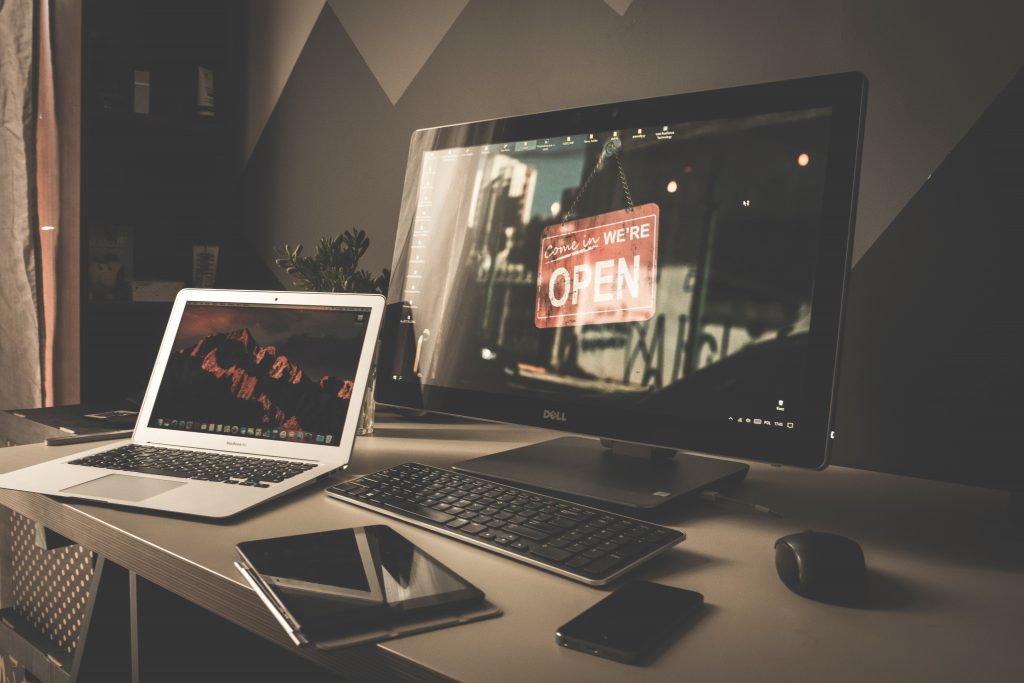 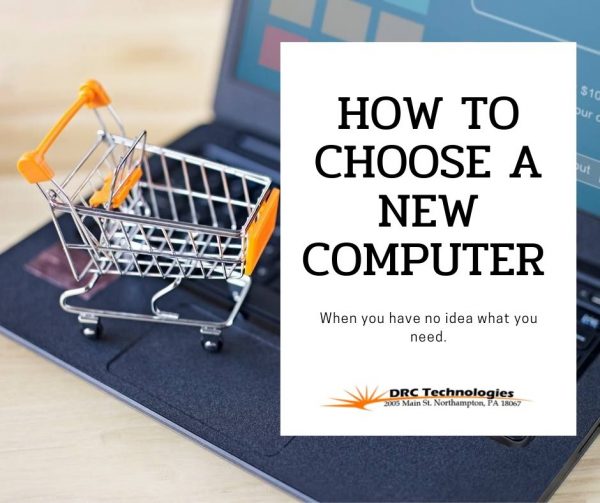 You need a new computer. You check online. But there are so…many…choices! RAM this, processing that. It can be overwhelming. What the heck does it all mean? You’re not a tech. How are you supposed to know how to choose a new computer?

So, off to the nearest big box or office supply store you go, figuring at least there will be a real, live person there to help you.

And there is! You trust their opinion because they work with computers right?  Maybe they do. Are they good at it? They might be.

Maybe they just sell them on commission.

But since you don’t know anything about computers, how do you differentiate between salesmen that are honest and those that are self-serving? How do you know they’re not going to oversell you on something you don’t need? It’s hard not to feel like you’re at their mercy.

How to Choose a New Computer

There is no perfect computer. Every option has pros and cons. But with just a few steps, you can make an informed decision and buy the right one for you. Buying a new computer doesn’t have to be stressful.

It doesn’t have to be overwhelming either. Start by asking yourself a few simple questions.

What kind of computer do I need?

What are your computer needs?  Choosing the right computer starts with knowing what you use it for.

Computers & tablets vary wildly in cost. There’s no need to overpay for a system, or spend a lot of money on a system that is more than you need.

But, conversely, you also don’t want to choose a system simply because it’s cheap as you may find yourself with less of a system than you need.

Now that you have a good idea of what you use your computer for, and what your budget is, let’s look at…

Don’t run scared. We’re here to help. Specifications are easy to find for every different type of device & we’ll break it down in non-tech speak.

What do all of these computer specs mean?

CPU & RAM are what makes your device go fast or slow.

Storage is often incorrectly referred to as memory. These specs show how much stuff, like documents, photos & software you can store on your device.

Resolution really comes down to personal preference. Like other electronics, tablets come in Standard Definition (1024×600) & High Definition (1920×1200). Cheaper versions are usually standard definition and are perfectly easy to see.

How to Choose the Best Computer or Device for Your Needs

Tablets are your cheapest option when choosing a computer or device. They’re also the least functional of all options, but, depending on your needs, they may just be perfect for you.

Like other electronics, tablets come in Standard Definition (1024×600) & High Definition (1920×1200). Cheaper versions are usually standard definition and are perfectly easy to see.

Though not as cheap as tablets, Chromebooks are inexpensive and provide greater functionality than a tablet.

Chromebooks don’t have a lot of storage as they’re mainly meant for internet based applications. Their internal storage ranges from 16GB (cheaper) to 64GB (more expensive). Since you’re likely going to be storing any pictures or documents in Google Drive or on a jump drive, a machine with a lower internal storage is a solid pick.

Standard or High Definition. Again, go for your personal preference.

Battery life on Chromebooks is generally better than on laptops due to their very lightweight operating system; most start at 7 hours and go up from there.

Desktop PC – Medium to Heavy Use

Desktops are the most expensive option for a computer, but they also offer the highest functionality.

Regarding desktops specifications, as specs for laptops & desktops overlap, we’re lumping them together below.

Laptops are a step above a Chromebook and, depending on model, a few steps below a desktop. Price-wise, laptops are in the medium price range.

The CPU (Processor) you need depends on your usage.

The memory you’ll need will also depend on your usage.

Laptop screens range in size from approximately 11″ to 17″.

For both laptops & desktops screen resolution varies between standard and high definition.

With desktops, you choose your monitor separately. They vary wildly in price and size; anywhere from $50-$2,000 and from 15″ to 34″. Desktop monitors can have ultra wide screen ratios which enables you to have two windows on your screen at the same time. This is advantageous if you multi-task.

Laptop battery life varies between 2 to 12 hours. You may need to replace your battery after 2-3 years.

A note about laptop batteries: If you consistently leave your laptop plugged in, you will drastically reduce the lifespan of your battery. Be sure to let your battery drain out completely once per week and recharge in order to prolong its life.

Now that you have a greater understanding of what type of computer or device you need, you’re prepared to go shopping with more confidence.

Remember to support your small, local businesses! If you’re in the Northampton, PA or Lehigh Valley area, DRC Technologies has you covered for all of your computer needs.

And don’t forget to Recycle your old electronics! If you’re in the Northampton, PA or Lehigh Valley area, we accept ewaste recycling drop offs, Monday-Friday, 9am-5pm. For more information, give us a call or visit our electronics waste recycling page today.

DRC Technologies
4.6
Based on 24 reviews

Jocelyn Graeser
01:18 11 Dec 19
Omg Where was this place all my life?? They Take and recycle so much stuff. Finally got rid of my old tv set that I... thought I'd be stuck with forever. So anything you know you can't throw out you can take there.read more

Lilly Gioia
17:56 26 Nov 19
Professional, courteous, dependable service no matter what the issue is. I've been more than satisfied with the work... DRC has provided for many years because the job gets done right.read more

Karl Jahnke
22:20 15 Nov 19
Very happy with my recent experience at DRC. It's great having people so close to home that I feel good about working... on my computer. Thanks!read more

KATHLEEN BASHORE
16:13 04 Nov 19
We've had DRC as our "computer guys" for well over 10 years. We always get prompt and very knowledgeable support, as... well as advice on new versions of software and upgrades. We highly recommend DRC.read more

Marvin Frack
02:31 23 Sep 19
They got my computer cleaned up and running faster than ever.

Gene Sywensky
16:11 29 Jun 19
Great down to earth people that know computers and have given me very good advice on how to use my laptop and I cannot... thank the staff enoughread more

GERALD SEIP
03:31 15 Jun 19
We recently purchased a refurbished laptop from DRC. While it has only been a week or two and I am still getting used... to the differences from our old computer- so far so good. They even called us after about a week just to see how it was going. Very nice company and super nice people. I highly recommend them over some big box store. JERRYread more

Chuck Albert
13:38 07 May 19
Phenomenal service and experience with DRC Technologies! After realizing potential future issues with my PC, Chris... recommended new hardware at a affordable price. They were fast and knowledgeable with solutions to my issues. I will definitely have my computer serviced here in the future when problems arise!read more

Danielle Lubene
16:25 22 Mar 19
Our company has been working with DRC Technologies for almost 4 years. From replacing all staff PCs with current... technology to helping with our in house operating system and test equipment (which are old technology that we need to work within), Chris and the DRC staff have always been knowledgeable, efficient and courteous. They have responded to several emergencies very quickly and resolved all issues. We will continue working with DRC for all our IT needs. They're the best!read more

Randy from Penmar
15:26 19 Mar 19
My company has been doing business with DRC for over 5 years and I've recommended them to several companies. They've... repaired my computers and set me up with software that has helped run our business. Excellent staff.read more

Robin Rivera
08:52 25 Feb 19
I've been there a couple times for unrelated jobs, and when either calling or in person, always very warmly welcomed... with a ton of patience to answer questions. Plus, super close, easy to get to and reasonably priced.read more

Peter Best
18:01 03 Jan 19
Fast, professional, and knowledgeable service for a reasonable price. The diagnostic fee was presented upfront and... fully explained. Even better, when my PC problem turned out to be a quicker fix than I thought, the diagnostic fee became my repair fee--no additional cost.read more
Next Reviews

We do not, have not, & will not share your information with anyone. Any information you provide to us will be stored on our secure server.

By signing up for our email list you agree that we will from time to time, send you notifications of new blog posts or a newsletter. You may unsubscribe at any time by following the link in the notification.